Humanity as a Super-Organism

The genius of the Hobbesian approach was that for the first time in history it viewed humanity in purely objective scientific terms and sought to unify man, matter and society into one vision.  Hobbes started out in physics, studying matter, however he soon developed a theory whereby he viewed humanity purely as “matter in motion”, and looked at humanity in completely secular terms.  Previous social theories attached supernatural explanations for humanity, however Hobbes was intent on looking at humanity the same way we looked at inanimate objects or plant and animal life.  Thus humanity would be looked at with the presupposition that no magical or divine intervention had shaped humanity or society.  This novel approach shook the world and is the beginning of the Western social science tradition.

Today all the social sciences start with this premise.  Economics, psychology, sociology, history and political science all start with entirely secular premises, no mythical or magical terms are inserted, humans are simply matter in motion, we watch and observe.  However even more ingenious was the conclusion Hobbes reached on humanity.  He saw humans living society forming an “Artificial man” that functioned as a single unit.  This looked at humanity as if humanity in its aggregate was one giant organism, a super organism if you will, that had its own survival strategy and behaviors designed to ensure its survival. 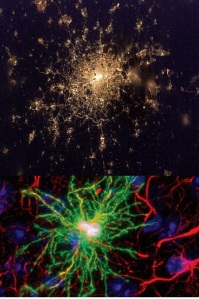 A picture of London compared to a Human Brain Cell. Human Civilization operates in the same way that life forms operate

This view is not far-fetched, insects such and ants and bees have long been looked at in terms of the hive or colony, and indeed the way these functions do seem to behave as if it was its own organism.  Humans in groups also have this effect, sports teams try to function as a single unit on the field, musical bands try to create a single sound and thus become a single instrument, corporations act as a single economic entity, with its own goals and wellbeing which is separate from the individuals who make it up.

It is not that much of a stretch to look at human civilization and see this same trend.  The actions of the individuals which make up society seem to create something which in its aggregate allows civilization to function in a way which ensures its survival.  Economist have long noted the apparent “spontaneous order” which emerges in markets and how the seemingly self-interested actions of individuals are, perhaps inadvertently, contributing to the functioning of the market as a whole.

This input of individual actions perhaps acts a super-intelligence of its own.  Of course this does not mean that humanity the super-organism need be conscience of its survival strategy for it to occur, there are plenty of unintelligent life forms who through natural selection of traits and cellular functioning create an emergent pattern and ordered routine that displays an intelligence of its own.  Our minds are nothing but the aggregate of the individual signals sent out by neurons, our bodies are the result of billions of cells acting in concert to create something which is greater than the sum of its parts.

And human civilization too creates something that is greater than the sum of its parts.  At the heart of how this works is a natural selection or sorts involving human activities.  Although human behavior may be governed by the subjective preferences of the individual, as a whole these seek to reinforce behaviors that benefit the species and stomp out the bad ones.  We see this in price signals, which although based in subjective determinations in value by individuals, through the push and pull of the markets and input from millions of actors is able to create a valuation that is more reflective of overall scarcity.  What if the self-regulation and emergent patterns we see in markets extend outside of the market as well, into things like culture and politics?

Humanity the super-organism seeks to promote its beneficial behaviors and regulate or stomp out the ones which are harmful for the society if left unchecked.  Now this is not to suggest that everything and every law we see is somehow automatically vital simply because it exists.  However it does suggest that there is a greater dynamic at play in which the forces which hold society together may be threatened or strengthened by a given activity.  Our goal is to identify these forces which are vital to society’s survival, the “stabilizing mechanisms” that are crucial for the super-organism to stay intact.

By approaching social questions using this framework we could help shed new light on these things and provide a new perspective on many age old questions.  Political economy could be greatly helped by input from this perspective.  Economists are a frustrated bunch, I’ve never met an economist who wasn’t upset about some policy that they believed was causing harm, and indeed from the perspective of an economist many policies seem simply perspective.  However by looking at such policies from a super-organism perspective we can remove some of the blind spots that exist when only approaching it from only one point of view.  Perhaps many of the programs and activities which decrease economic efficiency and befuddle economists are in fact worth this inefficiency to society because they fulfill a vital stabilizing mechanism.

Some societal behaviors may not appear to make sense at first, but perhaps many or all of the things we do serve a greater purpose which is in furtherance of our species.  We see this in nature as well, many behaviors that wild animals do seem to have no purpose, only for scientists to discover later on that they do in fact play a vital role.  Many of the “useless” genes we called “junk DNA” are now being found to actually have important roles to play.  Many organs and organelles that seemed to have no purpose were later found to have important roles.  The whole is the sum of its parts, and every part may play a role.

The emergent patterns in society involve input from cultural, economic and political institutions, working in tandem.  Cultural trends may help to regulate economic behaviors, economic changes instill cultural reactions, etc.  The division between state and economy, public and private, ecclesiastical and political are not recognized in this framework, all these forces are seen as simple organs working within the human super-organism.  A comprehensive and holistic vision of human society emerges.  One in which there are no blind spots or gaps.

I plan on exploring this theory in greater detail and looking at politics, sociology and political economy using this framework.  By viewing human society as an “Artificial man” we can provide illumination to many questions, and look at ourselves in a new light.  And hopefully the discoveries of such an approach can help to aid us in attaining a better understanding of ourselves, and perhaps enable us to provide some good to the world in the many challenges it faces.

5 responses to “Humanity as a Super-Organism”